Karanvir Gupta, 4 years ago
It was peak afternoon around 2:30PM. The sun was not that bright and clouds were neither too heavy on the city. But with no idea of traffic on the roads and the uncertainty with which it rains in the city, I was rushing to the airport to catch my flight at 5:00PM from Mumbai to Bangalore. My train of thoughts about the last 2 days spent in Mumbai was in total sync with the ride of the cab – a little smooth and a little bumpy. But that is how infact the entire city seemed to me – split into two parallel worlds.
From Andheri to Marine Drive via Juhu – Chembur – Worli Sea Link, I walked down the aisle of the city.  And en-route I saw and witnessed the city that I had only heard and scene in the movies. Some roads just busy with cars but not jammed at all. The traffic kept moving. We just stepped out of the cab and it started raining and in a whiz of opening the umbrella it stopped. To match to the weather – unpredictable and irrational – a cup of Chai was enough to soothe everything. I don’t know but I was so much in awe of the city called Mumbai that I couldn’t keep my eyes off any movement or not being distracted with any activity that was happening around. 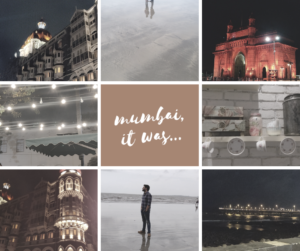 That feeling that you are here for the first and the last time absorbed me and left me devoid of my restfulness. May be I wanted to absorb the most of what I could. May be everyone who comes is equally wanting to know everything about the city in a go, which the city wont spell. From the posh cafe to incorrigible dirty Juhu beach – I wondered which was the Mumbai I preferred more. Looked like an oil tanker got spilled just moments before I reached there. But those 30minutes on the beach amidst the couples sneakingly making love to each other was the best time I spent in the two days. Listening to some of the amazing songs while strolling on the beach made me feel liberated as never before. Each moment left in me a thought of what if life was always so free and uncaged.
You fail to understand who copes with whom – is it the city trying to catch up with people’s pace or people trying to catch up with the city’s. Dirty, Extremely Dirty is what comes to my mind when I think of the entire city. It literally looked as if everybody has thrown the garbage of their homes on the roads or may be I was there in the city at the wrong time. And when you talk to people, you wished the humanity was always like this city. So much so dirty at the outlook but beautiful deep inside. Each person I talked to from the Chaiwala thela bhaiya to Archies wale Uncle to 3-4 cab drivers – all of them were storytellers. They had a story that seemed too rehearsed to be true or too filmy if I may call so. But each person had me involved in a heartfelt conversation.
Sometimes you wonder – the mystic a place has to it. Mumbai is like that. As hopeless as it seems when you see so many people struggling hard to make their ends meet and as hopeful as it could be when you hear their narrations of never ending hope they carry with themselves. You are forced to think if its the city that has grown thick skin or the people who are naive in their world of dreams and hopes. You look at the city once and it is like a house of cards ready to fall with a blow of wind. And another moment – sturdy as hell for any storm to bring it down. This, this magic that Mumbai has of being extremely affable and detestable at the same time is nerve-wracking.
Its ability to make a visitor like me to feel at home and many belonging to the place feel homeless, the city for sure lives in contradictions. It catches onto you like the hum of a beautiful song which you want to hum every moment until and unless you find just another muse. That was Mumbai for me.
From always being confused in differentiating the Gateway of India from India gate in the chart of Historical Monuments during childhood, now finally I will never get it wrong. I literally went and touched and felt how it was to feel the stones of Gateway of India – a monument that I had only known from books. To see the Taj that is just a scene on the screen like a distant dream – sitting in Leopold Cafe and just eating without letting my mind wander about any thoughts – it could not get more candid than this.
After 2 days of detesting Mumbai like anything for being so dirty and so cramped – I am not sure which Mumbai I fell in love with more. The one that is so full of chaos and keeps people on the tenterhooks or the one that keeps everyone so protected and close to itself. Mumbai, it’s not a city, it’s an emotion. You don’t live in it, the city lives in you!
Tags ##randomthoughts #CityofDreams #Mayanagri #Mumbai
Drishtikone

Zindagi is not so Dear after all!