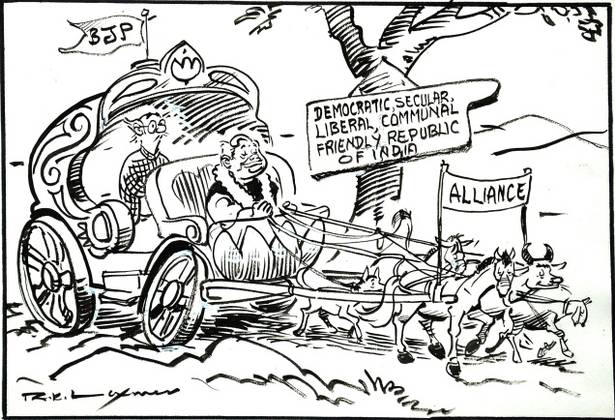 The image is a work by R.K. Laxman - the Indian Cartoonist
Drishtikone

Why I welcome BJP in 2014 and how the sentiment stuck?

In the last blog Indian Politics and The Common Man – Why I hate(d) Congress, I have expressed my concern over what really bothered me and millions of other citizens of the country as Congress neared its term completion in 2014. Now, let’s look at what made BJP the centre of attraction for the common man for the years to come!

I would like to start with the poem I wrote on 17th May 2014 when BJP came to power with complete bahoomat (mandate)  and Sh. Narendra Modi was sworn in as the Prime Minister of India. The poem goes something like this:

The entire poem talks about hope – the hope to make India a great nation it was once upon a time. All lines of the poem talk about hope except for one line (5th line) which brushes upon the fear of not turning the entire nation orange.

the confusion we all go through when elections approach

It speaks volumes about the mindset of the common man and the leap of faith all of us took to entrust our nation with BJP (which has always been painted with an image of being a Hindutva party in a nation that is secular and Hindu majority. If at all you have started believing we are a Hindu nation, I am sorry but that is a false narrative you are feeding yourself)

The entire country got together to bring BJP to power because of dismay, chaos, loot Congress had thrusted upon the citizens of its country. (and not because BJP was the most favorite alternative)

And to our confidence BJP took all the right steps that the common man of this country was craving.

It all started with The Lion, with moving wheels inside its body. Yes, I am talking about Make in India campaign where industries, investors from across the globe were invited to invest in the country in the manufacturing sector. This led to most of the States of India host an Industrial event and form their own ties, leverage their own political network to woo investment and get the wheels of development moving.

This resulted in not only movement of funds into the country but also made the presence of India felt at the centre stage of the world!

We were still absorbing this when #SwachhBharat became a movement rather than just a hashtag. From cleaning of rivers to streams and being environmentally conscious citizens, for the first time I felt we were involved in work and tasks – the citizen of a developed nation should be a part of. This united the entire India for a common cause that had previously been done only for Swaraj and Independence of the nation. While this kind of unity is required day in and day out for the country to thrive, survive and win each day!

It is very important to understand for any organisation to understand where its audience sits and what does it like/dislike. And #NaMo government leveraged digital channels like a pro to communicate about all such movements such as Clean India, Swachh Bharat campaigns. It led to campaigns such as giving up LPG subsidy, healthy female and child campaign, Clean Ganga campaign, etc. All of this did not stop here.
Setting up of toilets, stopping of open defecation in the country, rural electrification – there has been no stopping of NaMo government in addressing the basic infrastructural issues of the country – that have been pending since ages. I should not miss OROP implementation, 7th Pay Commission for govt. jobs, digitisation of the economy. While there will always be haters and critics and there should be (for healthy running of the country), I can tell you Rupay Card and digital evolution accelerated our movement towards becoming one of the superpowers of the world. Moving money digitally in a large nation like India is the first and powerful step to bring accountability into the system.

At a centre stage, building up and maintaining of relations with the Middle East, France, US along with neighbouring countries (and many more) – The NaMo government has been commendable.

Prime Minister Narendra Modi and the BJP team touched upon the issues that were basic, of national (and strategic) importance and many that strengthened our clout at International platform. For the first time, we were at the driving seat instead of just being at the back seat (and watching the show passively)

BJP gave us India, all Indians were craving for – for years! So when I asked myself – why did I welcome BJP! This is what I found as an answer:

“I welcomed BJP only because there was no other option but when BJP came to power it proved that while they were power hungry, they had done a lot of home-work and preparation to come to power. They had studied the nation in and out, they had evaluated the strengths and weaknesses of the nation and what bets to play on and what not to. They ensured that #thecommonman gets what s/he is deserving and longing for. They had substantial plans that waited to be executed to make India a great nation once again”

Not only that, they also ensured that their Team Cabinet works and attends assembly sessions properly and no one thinks it is ok to miss those. Setting the tone right that none of the party member finds it ok to be corrupt and promote corruption in any form. I welcome this New India.

There has been immense satisfaction to be a part of this New India! But, does that leave me to trust BJP blindly for what great they are doing to the nation? Won’t it then make us same like Congress?

Indian Politics and The Common Man - Part I

just getting it on the track now