Karanvir Gupta, 10 years ago
For the ones who think that A man is as complete in himself as fish in water, I challenge you folks. It is not the case. The bold words of father make you feel protected, the caress of your mother make you feel light, the innocence of sibling makes you feel young and fresh, the laughter with friends make you all so pepped up. And you say A man is complete in himself. And trust me fellas, You are still not complete. And I know this being a man. There is one more relationship that covers all these aspects and is very special and close to my heart. The Feeling of having a brother. And I’m glad to say I have one.
From the days of our kinder garden, I do remember our silly fights over the channels we had to watch, window seat in the car, getting the supper first after we got up. And fights I remember were so violent that we had nails imprinted on each other. We would literally bang each other heads against wall. And at the end, watching the same channel with same supper, I swear was more of fun. I can say almost 99.9% of the times what his parents got for him, I used to buy same things or vice versa.(true he is a cousin of mine yet more than if I had a real one) Yeah, we would wear same T-s, same shoes, same sandals (we called floaters sandals then), in fact I remember that green and orange chairs we had bought together. And today also I just wear his clothes as if they are just mine. It continues…..
When I am low, and I give a call to him, his same bold words like my Dad make me feel so protected, his sometimes calm words just make me feel so light. His fun filled jokes and sense of humor never make me feel low. Talking to him for hours over almost nothing is what the best times we spend with each other. Not to forget the dirtiest of jokes, the silliest of things, the wildest of fantasies and darkest of secrets we share with each other is something at least I do not imagine sharing with anyone else.
This is just one side of this person, on the other I respect him a lot as a human being. His silent ways, composed mannerisms, smart and fit personality always makes me feel envious. My parents also know yet so perfect world of mine (not boasting, it’s a fact) but last 23 years of my life he is the only person who has been exampled by them for many a good qualities he possess. My brother is a gem of a person. I just love him a lot. And today is his’ birthday that gives me a genuine reason to say all this to him. I thank his parents for such a wonderful friend in a brother they have gifted me and I pray to God for all his well being.
(With the lives getting busier day by day, we talk to each other less, last time we met it was after 10 months (almost an year) and things would get worse but just the feeling of possessing such a brother makes me delightful and happy.) 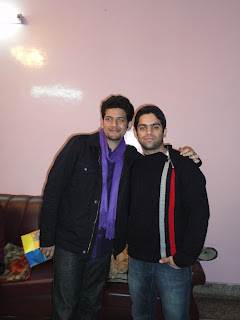 Over a Cup of Dreams, we find (un)happiness!