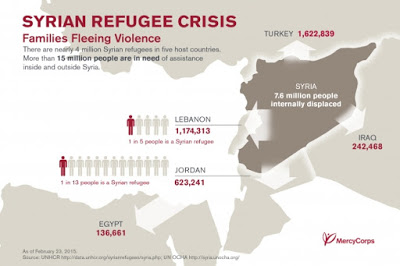 Theory1: If it is to be believed Syrian Crisis is a direct result of oppressing regime of Hafez al-Assad followed religiously by his son Bashr al-Assad. What instigated it was the Arab spring in the year 2011 that engulfed the whole middle-east in the heat of one of the biggest social media political revolutions. Undoubted there have been other state forces who tried to make it sound even more political and ruthless at humanitarian grounds and came forward to lend a hand.
In fact how strongly media (gagged by the money) weaves the stories is well reflected in this case. Because each link you refer to on Syrian crisis talks about:
1.  The minority group Alawite, an off shoot of Shi’ite group (comprising roughly 17% of the Syrian population) ruling the country
2. Key positions being held by Bashr al-Assad, his brother and brother-in-law and anyone and everyone who is close to the government or can be a prospective ploy to the government
3. Arab Spring has played a key role in destabilising the Syrian regime and pumped various factions to confront the presidential rule in Syria. All this has made the war murkier
4. It is all about the rights of the original inhabitants and how they are not getting what they deserve (which is true to an extent in the case)
Before we jump to any conclusion, which we just cannot, let us have a look at another theory.
Theory2: this theory plainly puts climate change as responsible for the Syrian crisis. Unfortunately media has not covered it enough.
Reference: http://tinyurl.com/p9nd7u6
It is believed that long drought from 2006-2011 forced the rural population to the urban areas. This made the civic amenities not easily available to everyone. This irked the people and lead to protest. But the incumbents – appreciative of the oppressive regime could not tolerate this and indulged in lathi charge (a it is called) and caught fire. Eventually entire Syria was caught in the fire.
While Theory1 primarily talks about what went wrong and who goofed up where, it really doesn’t talks about the root cause. Theory2 according to me is more horrifying because I am sure that can act as a mirror to many nations.
While the whole world will tweet about this, talk about this and media will have umpteen debates on this, I have few questions to make:
This crisis makes me say “It was never their problem, it was always OUR problem”. The way it has caught EU in the crisis, actually this can happen to any of the nations as on date. We are inextricably connected to one another. The mankind which has grown selfish by the very virtues of the mankind will have to find the way out. But How?

Zindagi is not so Dear after all!