Karanvir Gupta, 10 years ago
In the first four months of the year started, we had two family congregations. I guess enough to make you nostalgic for the rest of the year in case you do not have any such more occasions lined up in near future or the rest of the year. It is awesome seeing men discussing politics over the morning cup of teas, ladies giggling over the exchange of ideas over fashion and leg pulling and kids/ all siblings planning for the dhoom in the best possible ways. Nobody wants to leave the golden chance of celebrating the togetherness of the family in any way and want to make it as memorable as possible.
And I think, how much we have traveled down on the lanes from the past towards the concept of nuclear families. The concept which has not only restructured the ways families work and co-ordinate but also the architecture styles of “modern” day world, the demographics of the businesses from household items to the electronic gadgets. And I personally feel the economy is benefited like never before because of such societal change. Though many would vote for the righteousness of this change in our society structure and ways of living, I am not much of the same opinion. Nothing can be weighed against absolute advantages or disadvantages but can always be determined on the basis of weighted average.
The Joint families of the yesterdays had a larger number of people in the family including elders, kids, young and medium aged. This would keep the atmosphere of the family balanced. Elders to guide on trivial issues, primed age people to move the cycles of livelihood and kids to neutralise the tension that  would erupt at times. There were less cases of isolation, depression or marital feuds as time was distributed among many other members of family. Philosophically speaking there was more efficient use of resources and avenues, be it computers, conveyance or any other electrical/electronic or household item. This is also true that sharing of resources and time evenly among all finally turned to be the major cause of differences that led to Nuclear families but if we had kept our hearts opened towards each other equally, the problem would not have sprung. We would not have devised terms like the first family, extended family or say the boundaries would not have narrowed down so much, the circle would not have shrunk so fast.
Nuclear families on the other hand have ample resources for an individual be it a television, laptop, mobile, or an eatery, etc. Everybody has the will to chose and use things of their own choice. There is seemingly more independence. It has become lot easy to co-ordinate between four members of the family (husband+wife+two children; assuming a standard family) and in some cases grandparents. And if you see in terms of values, there is less potential to share and care, less of tolerance, and even less of forgiving attitude. Self respect has turned to in fact adamancy and ego. With the current trend of MNCs and companies set up in bigger cities, parents are left alone back at home. There is a void because of absence of closed ones and left alone at the later stages of life. The curtains of hesitation have been shed by the couple. Children are exposed to circumstances and situations that they should not be and left to a complex world at an early stage. 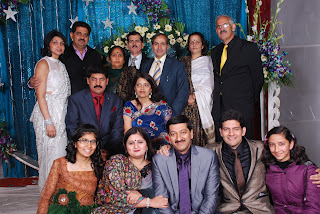 (This is my Family, still you can see 4/5 th here, but trust me though we stay separate bound by the circumstances, yet we live together and our hearts beat for each other.)
I do agree that everything has its  pros and cons but here I see joint family to weigh more in advantages over nuclear family. The promoters of Nuclear Family system, according to me, have gone too far in adapting the western life style. I, myself being born and brought up in Nuclear family feel strongly for the need of Joint family. With them around, everything is good. The celebrations merrier, the sorrows less sorrowful as it is said “Happiness shared is Happiness doubled and sorrow shared is sorrow halved”. I always vote for a Joint family, don’t know if it will happen, but I suggest people to stick to the tradition of JOINT FAMILIES. They have everything in abundance-love, affection, joys, forgiveness, understanding if not cars, tvs, computers and fancies. They have an opportunity of living a life that is much more easy and simple to live.
And, if you do not trust me, ask the families that have parted ways, it is just easy said than done that the nuclear families have pie of life and more independent, they are more situation bound, they are more prone to psychological disorders, social cut-off and uneasy state of mind as with the so called independence comes the whole lot of responsibilities that were once shared among other members of the Joint Family.
There are many families that are parting ways these days, many brothers getting separated, in fact children getting separated from parents, Hold On people before it gets too late. So, before you fall in the trap, give a thought!!
Wishing you a HAPPY ‘JOINT’ FAMILY DAY!
Drishtikone

The Art of Being Thankful