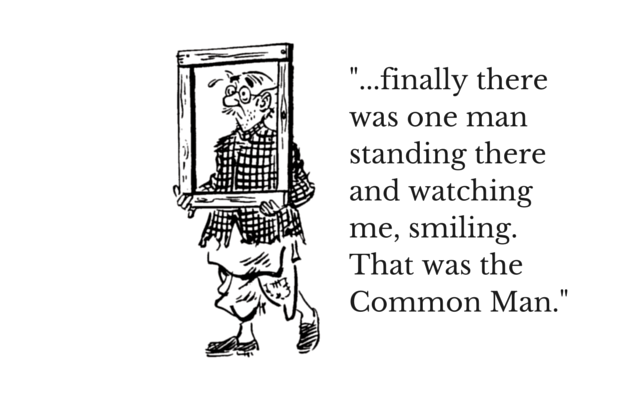 The image is an art work by R. K. Laxman - an Indian Cartoonist on Indian Politics
Drishtikone

I was watching the news when #CAB bill was being discussed in the parliament and I could sense that there were mixed reactions to the announcement. Following which, the discussions turned into debates and the noise that the media makes – I finally went on to ignore the chaos on the TV channels. A few hours later, when I login to my facebook and twitter accounts – I see there is already a war waging – not knowing the fact – that the war is neither against BJP nor Congress but common man against common man.

Folks have gone to the length of sharing hatred posts – “rehne nahi denge” to which replies started pouring in full fervour “jeene nahi denge”. The so called “BJP bhakts” started resurfacing those images where Nehru is with Lady Mountbatten, him smoking a cigar (in the ‘socialist’ times he was ruling in), sharing placards with name Rahul Gandhi Khan. And so on so forth.

On the contrary, “Congress humanitarians” started recalling what happened in Gujarat in 2002, enchanting Hindutva agenda, the power behind BJP manifesto – “RSS ke hain yeh sab log”. And then we know what followed!

It is a matter of shame, absolute disgust that something can aggravate us to an extent that our power to empathise, our years of bonhomie and friendship, our centuries of legacy and culture can be distorted and compromised with a few provoking statements and opportunistic agenda. Be it BJP or Congress – the fact that we are swayed so easily in the name of religion makes us even worse than illiterate.

While I was watching all of this, hearing opinions and trying to make sense of what was real and what’s not – what is right and what is unfair – 3 things happened on my social media account:

a. A well-educated person constantly sharing pro-BJP videos, posts and anti-congress banners and posters – without validating what’s fact and what’s lie. The sad part – that this person is a well-educated being.

b. Ping from a few friends – on what’s my opinion about #CAB and expecting an answer to which I politely said – I do not have an opinion yet. Just because I celebrated abrogation of Article370 and Article 35 A and supported ousting of Rohingyas from Jammu, they thought supporting CAB should be an obvious option. This is even worse because it reflects us being in a misinformed state.

c. Lastly, a few folks who were sharing both sides of the coin. They came like silver shining in the cloud because hum to aam aadmi hain. Our role in society is to listen to all sides of the story, understand their ideologies and have our favorites – but definitely not (vandalising) killing in the name of our favorites. That makes us no less than nazis, fascists!

While I was absolutely saddened by what what was happening around I was even more moved  by the thought that  why we react the way we do and how our life and experiences shape our “school of thought”. The result of which was the series of these 3 blog posts:

The debates over television and the actions on the ground were getting ferocious day after day and many of the folks could not stop ranting about “How BJP has attacked democracy and secularism by passing the CAA”.

Interestingly, they forgot to remind themselves that while Democracy and Secularism have been founding pillars of the great nation India is – there is one silent yet the most powerful sentiment that made India, India and that is the weapon called ahimsa.

When the students in various universities burn the public property, why do they forget that what they are doing is unlawful and plainly barbaric. Why do they forget by fuelling fire in the nation, they are actually satisfying the agenda of political parties until and unless they are also a privy and party to the criminal offence. Above all, who gives them the right to burn the taxpayer’s money like that?

Why do we demand and expect one side justice. Why do we forget our duties while asking for our fundamental rights?

The most surprising element in this entire story that raises suspicion is the revolt came from the “educated” corners of the cities (and the country) while (the ones who are truly affected if at all someone is) the rebel should come from poor and impoverished section of the society. This makes me question the sanctity and truth behind the violence that followed the announcement of Citizenship Amendment Bill. In fact there can never be any sanctity behind any violent act.

As a common man, there is so much we can do! Only if we know and realise that all that is done in politics is to woo us – the common man – their vote bank! Let us leave them on tenterhooks. Let us watch their actions. Let us rebel in silence and protest by our work. Let us stand tall for what is right and against what is wrong. Let us fulfil our fundamental duties while we ask for our fundamental rights. Let us give them time to perform, show and prove.

But let us not give them a sense that Hindu vs Muslim is what pleases us. Let us not give them any wrong notion that we follow you blindfolded. Let us not have an iota of doubt that if they do wrong, we will still support them. Because we voted for Congress for 60 damn years (12 general elections) and we voted for BJP when Congress looted India of its shine and when the time will come we will still swing our vote again because The Common Man has the Right to Swing!

In this digital age, we are free to express, opine and share our thoughts. But we should be careful that:

b. We should not share hatred posts that hurt the sentiment of any caste, colour, religion and ethnicity or a group

c. We should not share fear-instilling posts, banners being circulated by political pages

d. We STOP giving a name (religion) to the terror! There is no terror which is Islamic or Hindu; terrorism should be left to terrorism alone.

e. We form an unbiased approach and opinion towards the political parties.

f. We do not engage in war or fights or disputes with our friends and family over political and religious issues. “They” will change their sides but you won’t be able to get them back

India has been a great nation and with massive amount of potential and young force – there will be so many external forces and elements (and some internal as well) that will try to make use of each such opportunity to break the DNA thread of India. And THE COMMON MAN has got all the power to prevent that from happening! After all “saare jahan se achcha hindustan humaara, hum bulbule hain iske; yeh gulistan humaara” Jai Hind!

Note to those: who think that just because I supported Abrogation of Article370 and Article35A and supported ousting of Rohingyas from Jammu – I am a pro-BJP or pro-Hindu or for that matter anti-Islam. Dear each one of you, before all of that I am an Indian!

“ I was 5 years old when I used to wake up to the Azaan in the nearby Mosque. We were living in Poonch in a quarter surrounded by open fields on one side and some peaks on the other side. The peaks would get covered under snow during winters and the cold winds would come crashing upon us. But during all the seasons, the sound of Azaan remained the same – non-chalant keeping us warm. And I have always been in love with that sound. That remains one of the fondest memories of my childhood. It will always be!

Today also, when I hear Azaan (in the busy metros) – I sit up right and absorb that calmness. And if I am too tired on certain days, I remain on the couch half lying saying to myself – “there’s no wrong in getting the utmost relaxation by the sound that is so divine. And In my relaxation, I offer my gratitude to you – Oh divine!”

Going back in time, Azaan became an integral part of musicals that would soothe me. When you are growing up in Jammu and Kashmir, you cannot ignore the presence of Islamic faith around. You just learn to live amicably. And it so happened that I did my entire schooling (most of it) in an Army School. Cantonment areas happen to be the most secular places in India, if you are to believe me. Yahan sab tyohaar manaye jaate hain. From Diwali to Eid and Gurupurab and Christmas. “

And under such circumstances, you literally learn and live what secularism is! I can be a pro-BJP and pro-Congress at a few points or maybe both but I can never be anti-secular (in my sentiment) at any point of time. Discrimination on any basis is (and will be) the root-cause of all the troubles we as a diverse nation will ever face.

But when we grow up we are shrouded by multiple school of thoughts and day to day news, reports and incidents and that should be kept far from generalising an entire religion or ethnicity. Hatred has no religion. No god ever teaches to hate other human beings. We have to keep check on our own insecurities, fear and prejudices. And when all of us will learn, realise and appreciate the fact – we will be at a better off place at peace and calm within and outside. And that will be our true victory!