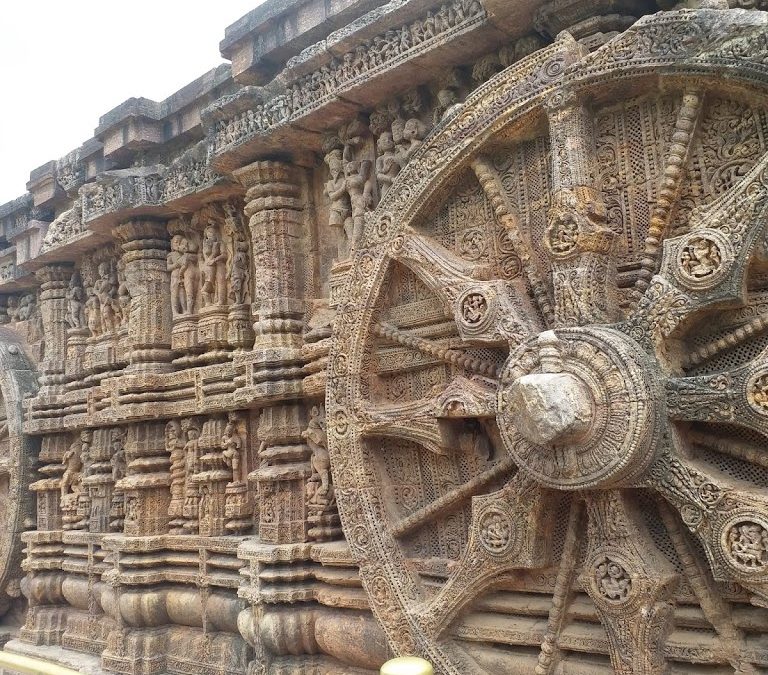 [BBSR – PartII] The legacy in murmurs!

Karanvir Gupta, 4 years ago
The Sun Temple Konark is not just another temple. It is a place you visit where The Chakra of Life comes complete
contd…
I wake up to the vibrations that I could feel, as if in my dreams, just to see 18 missed calls. The driver had tried hard to wake us up with all his possible valour. It is already 8:00 am while we were supposed to leave the hotel by 6:30 am. I thought our desire to visit the so talked about Sun Temple Konark has been left unfulfilled. The driver would have gone by now after trying to reach out to us incessantly. Leaving us without any hint of what to do the entire day and when suddenly the phone rings. “It’s driver”, I shout and immediately pick up the call. I apologise but he calmly says “Sir aa jao, I am waiting at the same spot where I was waiting yesterday”. I said “Ok, give us 30min and we will be there.”
We hurry up with all our morning rituals, take a bath, get dressed up and are standing in front of the car in 26 minutes to be precise. And so starts our journey on Day-2 in the city that has bathed in the glory of the traditions and legacy – with the air that is moist and damp – the sky that is shrouded in clouds giving the way to sun to shine for a while and then hide back. A city that has a pace of its own. It has been 20-25min and we are out in the hinterlands, viewing large open spaces all around. What we could not enjoy yesterday, we could today.
I am making pictures in my head about all that could be erotic and tending to be vulgar displayed in the open at the temple. Wondering why such temples were built. While we call this contemporary art form, it lay its foundation more than thousand years ago. And how is that it was perfectly fine to have an ostentatious display of sexual fantasies and positions back then. And how did the people assimilate all this information? I have a swirl of questions going around in my head. “We are almost there”, says the driver.
We take an auto from the taxi stand which drops us at the gate of the temple. ‘Rs30 for nationals from India, Bangladesh, Bhutan, Nepal and Sri-Lanka and Rs500 all other nations’ reads the board hanging at the top of the ticket counter. As we enter the temple, there are huge stalls setup selling artefacts, local handicraft, and souvenirs at both sides of the aisle. We walk directly towards the temple ignoring many a callouts to the individual stalls.
You stand the top of the staircase of the first sanctum. (Yes, this temple used to have 2 sanctum unlike other temples.) It looks nothing but ordinary. A huge playground (or park would be a better word), at the centre of which lies a structure around which people are congregated.
But as you walk past each and every step, knowing the age of each stone and the legacy of the temple – you are waow’ed rather flabbergasted. It showcases the 166 nritya mudras which are engraved on the walls of the first building. Dance – the expression of life – captured in those beautifully carved structures mesmerises you. You move a little ahead and see the Sun God in his childhood. You keep moving clockwise and you see the Sun God in his youth and old age. Very much depicting the grahas of life (Brahamacharya, Grihasta, Vanaprastha)
While these are depicted at the top of the central temple structure, at the ground level you come across the day-to-day life from when a child is born to when a man and a woman get married and mithuna. The art that depicts minute details like the mornings when you stretch, afternoons when you need a nap to the evenings when the woman is doing a touch-up for the social gathering. There are games that men are engrossed in. From a vidai (rukhsat) of a girl to the welcoming in the new home – each and every scene from our life is depicted there. And in this huge schema lies the work that depicts sex and sexual positions. From voyeurism to threesome to an orgy – it depicts all.
The guide murmurs things in your ears which are barely heard left alone understand. And you wonder – so much hissing for the boldness of our culture. Look at these murals and take pity on yourself – I really wanted to say this to the guide. Those people had the audacity to build this so beautifully and you (try to) explain that grandeur in your murmurs.
While we circumvent around the temple, we see that the entire temple is built over a chariot like structure the base of which has 12 wheels on one side and 12 wheels on the other (over which the entire art is depicted). By looking at the shadow of stick pointed at the centre of these wheels, one could tell time. The half wheels depict the activities of 12 hours of the days time and remaining twelve wheels depict the activities of the night time.
So much thought! It covers the 24 hours of our day depicted on the 24 wheels and the entire life on a horizontal slab running parallel across the temple. It is like you go there and the entire chakra of your life seems to have come complete. Your entire life comes gushing in front of your eyes. Take a deep breath and sigh!
The temple was anything but ordinary! It is an epitome of art, thought and reflection of our own lives – the depth of which is tough to put in words. It can only be felt. We felt it and we left the place with some (actually quite much) food for thought – a piece of which you just finished reading.
Tags #Architecture #Bhubaneshwar #History #Kama #Konark #Life #Temples of India #Travel
Poetry

[BBSR - Part I] Bhima and Manas: A Tale of Two Priests