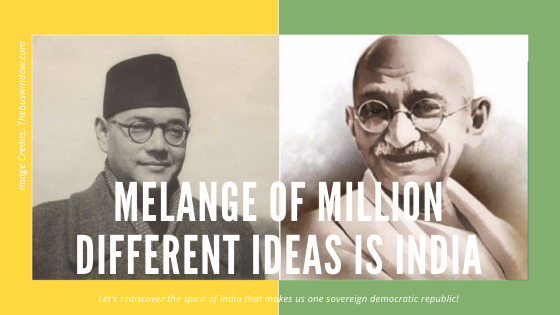 Last few days, in fact months – I have been quite disturbed by the turn of events and I can’t stop lamenting over that. A few things in particular came out very starkly, strikingly:

It so happened that I started watching #TheForgottenArmy on #AmazonPrime yesterday late evening. Well that is how my Saturdays are spent. Me and my wife pick up a series and take it to the finishing line. In this entire routine, what makes me the utmost happy is both of us are not fussy about the choice of series. She sits with me to watch something of my interest and somedays I sit to watch something of her interest. Isn’t it amazing?

But that’s not the atmosphere prevailing in our country these days. While I was binge watching this one yesterday it hit me that How 2 different (absolutely opposite) schools of thought prevailed in 1940s with utmost mutual respect for each other while bearing the single goal – The Freedom of India from the British Rule.

People from different castes, ethnicity, religious communities and descents joined hands together and sat in a passive-aggressive mode with Gandhiji. And the brethren and people from the same families and groups went and joined Indian National Army in an aggressive mode to get India free from the clutches of 200 year long rule and slavery.

It must have required a lot of patience, sensibility and maturity for both the schools to co-exist and let each other function towards one common-shared goal. And this is what is missing in our current atmosphere. We do not have the common shared goal – we do not have the common idea of having a strong, liberal and superpower India. What we have – is our own idea of how India should be (and should be run).

Because, all of us are NOT working towards the common goal – the betterment of India; that is the reason why we grow impatient, abusive, regressive, violent and murderous towards each other. Forgetting that who we are fighting are very much our own. (On a side note but definitely importantly, we are a secular country and that makes us look stupid and foolish every time we start polarising in the name of the religion. That should stop immediately.)

Going back to the series #TheForgottenArmy, when the grandson asks his grandfather, the surviving soldier of INA that “What can we do in the state of mayhem and chaos?” He answers non-chalantly, “That is exactly what you have to figure out. It was easier to attain freedom but to preserve that freedom in a more challenging task and that onus is on you.”

I strongly believe that if Democracy and Freedom are under threat, then our Republic is under threat. So, yes Democracy for a Republic is the need of the hour! As we celebrate our 71st Republic Day today, let’s pledge that we all will work towards building a nation that accepts, opines and respects the different point of views and allow them to merge (like sugar in milk – milk being India) towards one common goal – The Democratic Republic of India!